“Life is short
And pleasures few
And holed the ship
And drowned the crew
But o! But o!
How very blue
the sea is.”
― Clive Barker
I begin this post with a confession. I am not a natural-born sailor. As much as I love the idea of being a seafaring badass, the truth is that it takes me at least a day to find my sea-legs, and most of that time is spent making sure that my Foetal Position of Drowsy Discomfort does not get in anyone’s way. Any efforts I do make to contribute are usually hindered by the fact that I have to relearn the name and purpose of every rope each time I step on board. To be fair, there are a lot of ropes. And they never seem to be in the same place.
I do love the sea, though, and once I make it past the two-day mark I am almost competent. What I lack in knowledge, I make up for in youth and enthusiasm.
While enthusiasm can be found in abundance aboard Anastasia, youth is somewhat more rare. On our most recent trip, my friend Ben and I had the dubious honour of being the only two on board below the 50-year mark. I am not ashamed to admit that our elders and betters put us to shame.

We were participating in the Mykonos Offshore 2019, a race between Cape Town and the Club Mykonos resort in Saldanha Bay. The starting times for the different categories of yachts were all staggered around 8am. Even with favourable winds and a good start, the race is one that can take well into the night to complete. Unfortunately, we had neither. Our only comfort as we inched our way over the starting line and across the glassy waters was that our competitors were all in the same boat. Or, well, boats.
After the first hour of tacking across the bay with agonising slowness, the elder members of our crew made the executive decision to hoist the iron topsail. With the engine fired up, we were officially out of the race. Our participation might seem embarrassingly short-lived, but choosing to motor instead of sail turned out to be a wise decision. With winds remaining frustratingly mild throughout the day, most of the other participants resorted to the same measures within a few hours.

With the race abandoned, our crew quickly fell into ‘cruise mode’. Most of our time between Royal Cape and Mykonos was spent dozing, bickering or whale-spotting. We were fortunate enough to catch frequent glimpses of whales spouting and breaching. In fact, we were so fortunate that at some points we posted lookouts on the bow just in case we glimpsed some a little too close.
Whales are not the only marine wildlife to be found off this stretch of coast. The occasional sunfish or African penguin would drift past us, seemingly without a care in the world. A pod of common dolphins raced us for a while, before realising we were absolutely no competition and zooming off to find better entertainment. Everywhere we looked, we saw hints of the multitudinous life forms hiding beneath the waves.
All these encounters paled in comparison to the one we experienced as we sailed back from Mykonos to our overnight stop at Dassen Island. While cruising through the choppy waters just outside the entrance to Saldanha Bay, we found ourselves in the centre of the most enormous pod of seals any of us had ever seen (and remember, some of us had been around long enough to see more than most). There must have been thousands of them travelling along the coast, leaping and splashing such that the entire sea appeared to boil. If we were bemused to be caught in their midst, they were equally so to find us there. Many seemed to be craning their heads around mid-leap to give us affronted looks, while others showed their disapproval through excessive splashing. 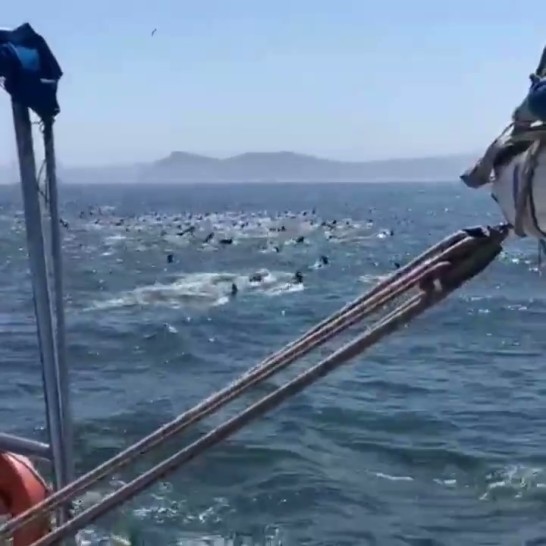 Our overnight stop at Dassen Island was as peaceful as our seal encounter was tumultuous. Situated about 10km off the coast, and inhabited only by the area’s conservationist, the island holds a desolate beauty. The rocky shoreline boasts a few wrecks that have long since been claimed by the local bird life. Besides the lighthouse, the conservationist’s home and a small jetty, there is no development to speak of. In order to preserve this proclaimed nature reserve, none are allowed to step foot on the island without special permission. Most who visit it, like us, simply anchor in House Bay and enjoy the serenity that comes with isolated places.

It goes without saying that we did not win, or even place in, the Mykonos race. We busied ourselves with more important things, like napping and snacking. In truth, crewing aboard the Anastasia is not the most direct route to becoming an experienced sailor. But I still find that each time I go out on her, I learn something new from the old men and the sea.

I am a 22-year-old graduate of the University of Cape Town in South Africa. My majors are Politics and Philosophy, but I am a serial dabbler when it comes to new skills and subjects. Language is an area of particular fascination for me, as is the unpredictability and strangeness of travel. It is in new places among unfamiliar faces that I feel most engaged. I hope to share many tales of travel on this blog (pockets willing). I have always loved hearing the differing stories and perspectives of people from around the world. I intend to pursue a career as a writer and journalist, and am always searching for new techniques of expression through words. View all posts by Tam